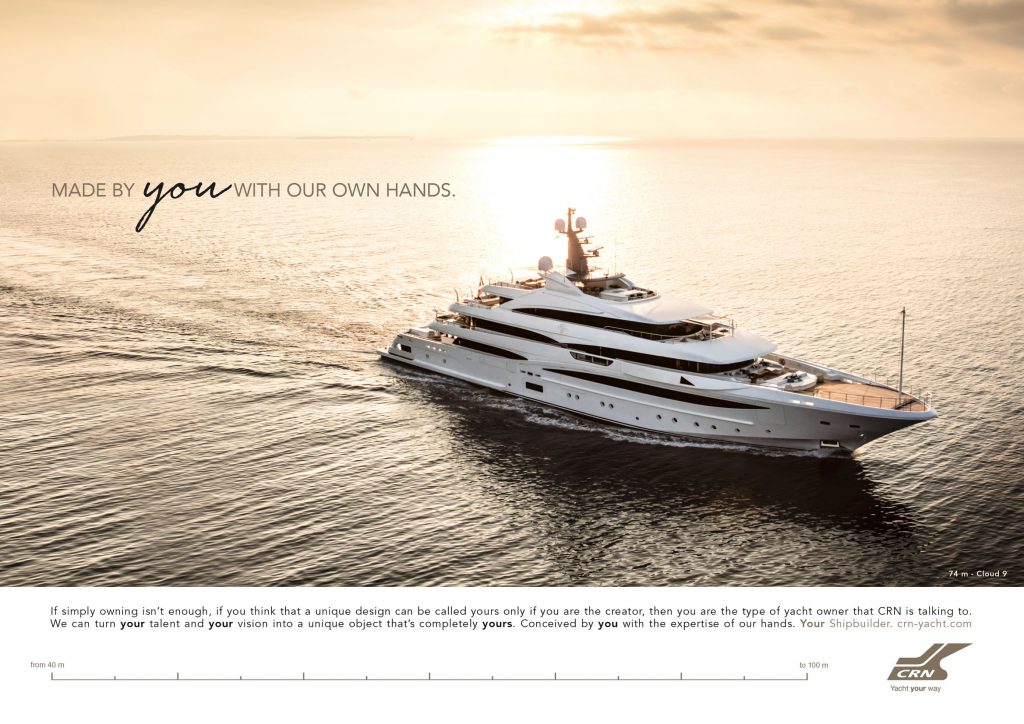 ‘MADE BY YOU WITH OUR OWN HANDS’,

14 September 2017 – Being involved in a creation as the sign of real wealth – this is the message of the
new advertising campaign of CRN, the shipbuilder and historical Italian brand, part of the Ferretti Group,
specialising in the construction of fully-custom steel and aluminium pleasure vessels between 40 and 100
metres in length. Owning an exclusive asset or using it to display one’s status is no longer enough. Today, real
exclusiveness is having the opportunity to take part in its creation.
The new campaign reflects the ongoing evolution in CRN’s communication. The concept of ‘bespoke product’ takes on a new meaning,
opening up to an Owner that dreams, designs, and imagines, as happens in any truly creative process. Hence, the core theme and payoff of the
campaign, ‘Made by you with our own hands’, which epitomises not only the idea of being the owner of an asset, but also the opportunity to
customise it in every detail. CRN grants this expressive freedom, turning Owners from mere ‘possessors’ into real authors. The CRN shipyard’s design
expertise blends with the Client’s talent and vision, to create a unique style, capable of reflecting the Owner’s personality to the fullest.
In the new international campaign, developed by the agency Aldo Biasi Comunicazione, the elegance of the new 74-metre Cloud 9 becomes the undisputed protagonist, perfectly embodying the new communication concept. The latest masterpiece by the Italian brand, which will be presented as a world première at the
Monaco Yacht Show, was entirely built around her Owner’s vision, skilfully harmonising the outstanding functionality of both exterior and interior areas and the sophisticated design of the interiors. CRN’s new campaign ‘Made by you with our own hands’ will be displayed in selected international trade magazines starting in September 2017