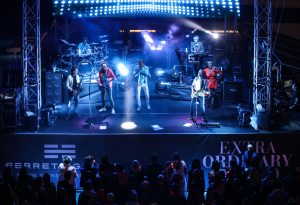 “EXTRAORDINARY WORLD”: THE CONCERT BY DURAN DURAN ORGANISED BY THE FERRETTI GROUP IN COLLABORATION WITH THE YACHT CLUB DE MONACO

The exclusive live performance has opened the 2017 edition of the Ferretti Group Private Preview. Through tomorrow evening yacht Owners have the opportunity to admire the entire Group fleet in this special preview, including the 6 models making their international débuts, which will be displayed for the public as of Tuesday, 12 September, at the Cannes Yachting Festival
Monte Carlo, 9 September 2017 – When Duran Duran appeared on a stage that seemed to skim the water’s surface and surrounded by magnificent boats, the Ferretti Group’s guests must certainly have felt that they could identify with the sentiment expressed by the title of one of this legendary British band’s famous songs: All You Need Is Now. The spectacle and glamour of this memorable event were made tangible in the enchanting Monégasque night. A live performance full of hit songs and energy once again proved Duran Duran’s boundless talent, as they switched between irresistible dance rhythms and the pop songs that have made music history for the last thirty years.
The Ferretti Group and the Yacht Club De Monaco renewed a partnership that is unique worldwide and capable of producing an unforgettable event for the third year in a row. “Extraordinary World”, a name inspired by Ordinary World, one of the British band’s most famous hits, was the name given to this private concert celebrating the Ferretti Group’s unique and extraordinary ability to design and build yachts that go far beyond the ordinary.
“I have followed Duran Duran’s career since they first started out, and I have always loved their songs as well as their
ability to change and experiment without ever losing their identity or their inspiration”, commented the Ferretti Group’s Chief Executive Officer, Alberto Galassi.
“Duran Duran agreed to put on this one-time, one-of-a-kind concert for our yacht Owners and for the members of the Yacht Club de Monaco. They are an extraordinary band, which, like our yachts, has style, personality, and that ability to innovate and experiment which always puts you a step above the rest, in music as in shipbuilding. It’s no coincidence that they have come through diverse eras but always remained at the top. Thanks to their music and our guests, the Ferretti Group Private Preview 2017 has once again been an evening to remember.”
The set list, which elicited an enthusiastic response from the over 500 guests, was a triumphant parade of hits ranging from Ordinary World to the songs that first made the band famous, like Wild Boys, Notorious, Hungry Like a Wolf, Girls on Film, A View to a Kill and the more recent Pressure Off and White Lines. The encore was marked by the legendary hits Save a Prayer and Rio.
“We are happy that our renewed partnership with the Ferretti Group was able to produce this fabulous private concert”, declared Bernard d’Alessandri, Secretary General of the Yacht Club de Monaco. “And we were delighted to welcome Simon Le Bon, who is passionate about yachting. I also remember well his participation in the 1985/1986 Whitbread on Drum, a truly unique sailing adventure.”
A fleet consisting of a full 25 vessels, moored in front of the Yacht Club and representing all of the Ferretti Group brands provided a luxurious backdrop for the concert, rendering even more extraordinary this event that opened the third edition of the yearly Private Preview.
From their privileged positions in seats on the Quai Louis II and from the terraces of the Yacht Club, guests were able to admire 6 new yachts that are making their international première: the new flybridge boats Ferretti Yachts 780 and Ferretti Yachts 920, the Pershing 9X, the new Riva flybridge yacht 100’ Corsaro and the most recent addition to the open fleet, the 56’ Rivale, along with the Navetta 33, the second semi-displacement ship in the Custom Line fleet.
All are available until tomorrow afternoon, along with the rest of the fleet, for exclusive tours and sea trials, and are ready to set sail, upon conclusion of the Preview, for Cannes, where, from Tuesday the 12th to Sunday the 17th of September, they will be the stars of the 40th Cannes Yachting Festival.