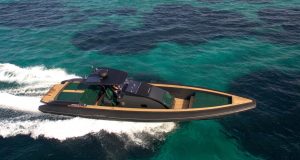 Several initial orders have already been placed ahead of the summer season. Manufactured in Athens and headed by ex-offshore RIB racing champion, Gerry Petratos, Technohull builds custom centre-console GRP and Carbon Fibre hulls with open or cabin versions that range from the entry level 6.8-metre to the popular 41’ OMEGA fitted with outboard, jet inboard, shaft of arneson drive systems.

Established in 2005, the company has experienced annual growth of 50 percent with a 40 percent increase in exports. Petratos called the arrangement as “a promising collaboration” due to “Ray White Marine’s experience and expertise in representing recognised, high-end brands”.

The off-shore RIBS have done well in Croatia, Turkey, Greece and France. The factory is self-funded has plans to release several new models over the next 12 months.

“In a challenging global marketplace we see the Australia and New Zealand region having huge potential due to the climate, ocean conditions and client demands,” said Petratos.

“We welcome Brock Rodwell and his team to the family and look forward to heading downunder for Sanctuary Cove and Sydney Boat Shows.”

With two of the 999s outboard versions already enroute to Sydney, the new entrant to the market will focus on avid day boaters and larger boat owners looking for a stylish tender or chase boat.

“Clients have been asking for this solution for a while,” said Brock Rodwell, International Sales Director for Ray White Marine.

“For example, they may want day trips at 70 knots to Pittwater and back without sacrificing having a comfortable entertaining platform. It caters for many markets, especially our larger vessel clientele, typically 21 metres and above, wanting another toy.”

Speaking from Europe where he is finalising summer orders Rodwell added, “There is a huge market in local waters for clients looking for high quality, high speed, dry performance ribs – getting long distances in a short amount of time in sheer comfort and style.”